This is Caitlin's story.

Caitlin Mary Hornung’s favorite colors were yellow and pink. She loved swinging and taking walks and playing outside. She loved to dance and sing along to Disney songs, play dress-up, and take care of her baby sister, Danielle. One of her greatest joys came from creating art. In 1997, at the age of four, Caitlin was diagnosed with a malignant brain tumor. She spent the next three-and-a-half years battling for her life. Caitlin underwent surgeries, chemotherapy, a stem cell transplant, radiation treatments, hundreds of blood transfusions, two long stays in the Intensive Care Unit, and was treated at children’s hospitals in four different states. Several times her cancer appeared to have been in remission, but it kept coming back. Despite the tiring treatments and long hospital stays, Caitlin managed to keep a positive attitude by finding joy in creating art. She could always be found with a backpack full of arts and crafts supplies, coloring pictures for friends, family, and hospital staff. In October of 2000, shortly before her eighth birthday, Caitlin lost her battle with cancer. What friends and family learned from Caitlin was that healing is as much a mental process as it is a physical one. That is why in March of 2004, Cheryl Hornung, Caitlin’s mother, began Caitlin’s Smiles. Though Caitlin passed on in 2000, her smiling spirit is kept alive through the work of Caitlin’s Smiles™. 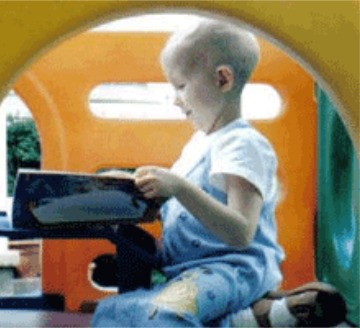 Through the pain and sacrifice, Caitlin smiled as she focused on creating her beautiful masterpieces for others.

What she did not know at the time was that she was sharing much more. “Losing my daughter, Caitlin, was something I will never recover from, but I can and will continue to put smiles on the faces of kids as they fight their own battle,” says Cheryl Hornung, founder and director of Caitlin’s Smiles.

Cheryl Hornung was still wracked with grief over the loss of her 7-year-old daughter, Caitlin, when she made a fateful call to Penn State Hershey Children’s Hospital in December of 2000. Caitlin had died of cancer in October of that year, just before her 8th birthday. Her mother, a bargain shopper who snatches something up when she sees a good deal, already had purchased her birthday and Christmas gifts. “I called Penn State Children’s Hospital and asked if I could bring in all her presents,” says Hornung. “And I saw what a difference that made for the children.” Bringing smiles to sick kids gave Hornung a much-needed smile of her own.

It also gave her a mission. Three years later, Hornung started Caitlin’s Smiles, a nonprofit organization that supplies craft kits, art supplies, and gift bags to kids with chronic and life-threatening illnesses. It honors the legacy of a little girl who loved to do arts and crafts and then give them all away. “She used to spend all her time coloring pictures and giving them to all the nurses that came in the room,” Hornung says of Caitlin, who was diagnosed with a brain tumor in 1997 at the age of 4. More surgeries and hospital stays followed, and Hornung and her husband made sure Caitlin always had her backpack of craft supplies with her to keep her distracted and happy. “When she was an outpatient, she’d pass out smiley-face cookies and whatever crafts she had that day to the other kids, doctors, and nurses,” Hornung recalls. “We found with her that healing was as much mental as it was physical.”

When Caitlin lost her battle, it was Hornung who needed to heal. She volunteered for the organizations that had helped their family during Caitlin’s ordeal. But she kept thinking back to her daughter’s backpack of arts and crafts. Finally, in 2004, she decided to take the plunge. Progressive Education of Children in the Arts Network offered to help her start the nonprofit Caitlin’s Smiles. When she stopped by her church, First Zion Lutheran Church in Dauphin, she was given the keys to an empty office in the church building to use as Caitlin’s Smiles headquarters. Hornung’s little endeavor quickly gained steam, and she cultivated a cadre of volunteers to help her buy, pack, and deliver several different kinds of goody bags. The organization relies on donations of money and supplies, fundraisers, the occasional grant, and a lot of volunteers. “I am shocked daily,” she says of the outlet her organization gives to those who need to spread smiles, not just receive one. “I saw my clients as just being the kids and families in the hospital. And now I see how important it is for people to get hooked up to a good cause and be able to give back.” In February 2009, Caitlin’s Smiles moved its headquarters to downtown Harrisburg because it had long outgrown its space at the church. Trying to make rent payments — along with meeting every request that comes in — can be stressful, but Hornung says it’s comforting to stay so connected to Caitlin. “Most of the time I really feel her presence up there guiding me,” Hornung says. “I know she’d say, ‘Way to go, Mom. I love this!’”

The mission is simple, the impact immense. Our goals:

To give children with life-threatening or chronic conditions a way to express their creativity.

To make hospital stays and treatments less stressful for children and their families by providing them with engaging arts and crafts activities.

To work with medical staff to provide stimulating activities for their pediatric patients that are safe, beneficial, and appropriate.

To give our volunteers meaningful, enjoyable, ability-appropriate, and necessary tasks that contribute to our mission. 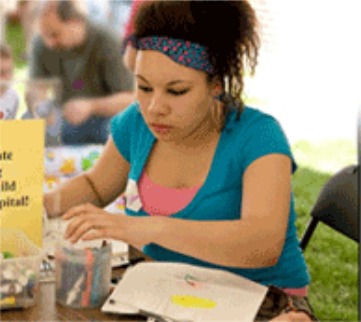 Our Board of Directors is composed of amazing individuals from a wide variety of local businesses and organizations. Each brings a special set of experiences and contributions to Caitlin's Smiles and we value their dedication and passion.

Caitlin’s Smiles Inc. is an equal opportunity employer committed to the principle of diversity with both our employees and volunteers. We therefore: