Back
Janet Krall met Caitlin while she was Cheryl’s retirement counselor with the state. A few years later, it was pure coincidence that Janet became a volunteer with Caitlin’s Smiles.
“I didn’t know Cheryl did this,” Janet says of the day that Kohl’s assigned her and co-workers to Smiles Central as part of a United Way Day of Caring more than a decade ago. “I walked in here with a group from Kohl’s and said, “Oh, my God. That’s that little girl’s mother.”
Since then, Janet has remained an important part of our team of volunteers. “It was because this was near and dear to my heart that my co-workers agreed” to keep coming back for quite a while, she says.
Janet still comes in every week for three hours, with Kohl’s donating $25 an hour. Her duties have grown to include not only assembling craft kits and quality control, but to filling Bags of Smiles. She also helps with Bingo Night, our Round of Smiles golf tournament and our A Night of Smiles art auction.
“I love to give back. I have been blessed all my life,” she says. “I enjoy helping people. The older you get, the less you have needs of your own. It’s much easier to give back.”
Janet does have a goal for Caitlin’s Smiles. She’s trying to recruit more Kohl’s workers to join her in our mission, as the department store chain is raising its contribution to $50 per hour for each volunteer.

If there are Kohl’s employees at other stores who would like to volunteer with Caitlin’s Smiles, please call 717-412-4759 or email volunteer.caitlinssmiles@comcast.net.

Says Janet, “I’m hoping to just get one other person.” 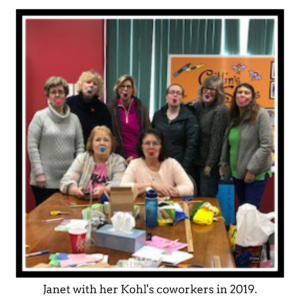